An unexpected Lamborghini Car Accident happened. The video of which went viral on Instagram and TikTok. An altercation between two drivers is making the rounds. Matthew Heller, a Florida entrepreneur is the owner of Lamborghini and on the other hand, an unknown white girl was in a black Audi sedan. 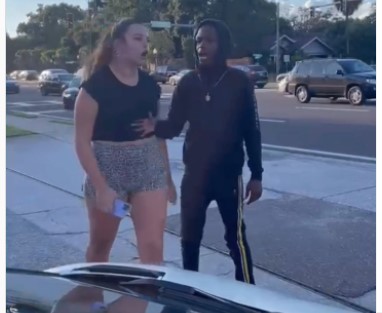 The viral video showed that the girl approved Heller and blamed him for hitting her Audi from the front.

The unnamed woman is heard yelling: “You did that to the front of my f***ing car!”.

Heller responds: “When you rear end somebody, that’s not how this works.”

Further in the video, she was seen desperately trying to get sympathy while putting the blame on Heller.

It was really impressive to see how Heller handled the situation so smoothly while not getting in a heated argument with the desperate girl. He even said that he can call the cops.

Further in the video he also shows what happened actually through the CCTV camera which recorded everything.

The CCTV footage showed that the black Audi crashed his white Lamborghini from behind.

In the video, she can also be seen saying “You white people!!”. Later after waiting for the video people also made fun of the girl saying that she is confused wether she is black or white.

One persone said “This chick 😂 lying through her teeth… she needs to be checked into hospital.” and the other one said “Lmaooo “you white people”😂 aren’t you white? Damn she gunna be paying sooo much for that damage that she did😂 have fun paying that off while you gotta pay for the damage of your own car”.

Matt, owns a Tampa-based company named Horn Blasters. his Instagram video got lakhs of views on Instagram and TikTok. Many of his followers have also requested a follow-up on the following situation.