Controversial Nigerian pastor TB Joshua and the televangelist who founded a Christian megachurch in Lagos died at the age of 57 years old. Many African presidents, senior government officials, international soccer players, musicians, and other high-profile guests have worshipped in the church. 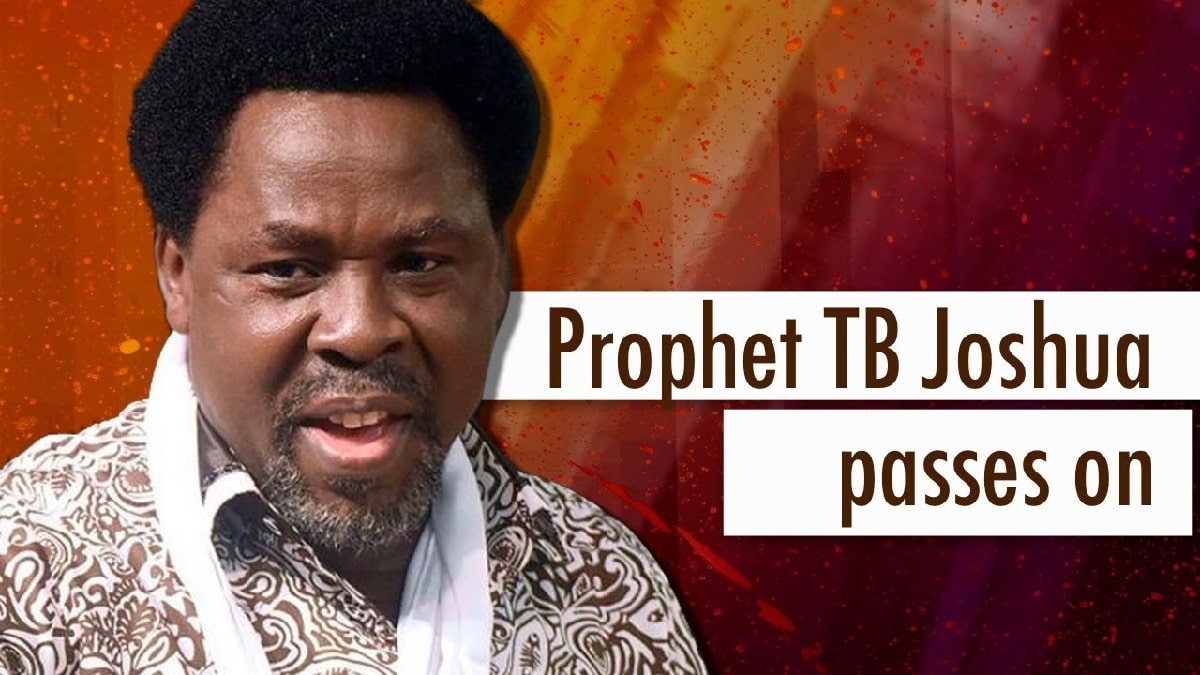 Joshua was the founder of The Synagogue Church of All Nations (SCOAN). The church’s official Facebook page gives the sad news of his death. Moreover, his church said in a statement Sunday.

“On Saturday 5th June 2021, Prophet TB Joshua spoke during the Emmanuel TV Partners Meeting: “Time for everything — time to come here for prayer and time to return home after the service,” T.B. Joshua Ministries wrote in a Facebook post.

“God has taken His servant Prophet TB Joshua home — as it should be by divine will. His last moments on earth were spent in the service of God. This is what he was born for, lived for, and died for.”

However, the actual cause of death of TB Joshua not stated.

One of the pastor’s lawyers Olalekan Ojo also confirmed his death.

“I confirm that the man of God, pastor TB Joshua passed away on Saturday after his evening program,” Ojo told the AFP news agency.

Temitope Balogun Joshua also known as TB Joshua was born on 12 June 1963. He was a Nigerian charismatic pastor, televangelist, and philanthropist. Joshua was the leader and founder of The Synagogue, Church of All Nations (SCOAN) which is a Christian megachurch that runs the Emmanuel TV television station from Lagos.

According to Joshua’s official biography, unusual circumstances surrounded his birth, moreover, he said that he spent 15 months in his mother’s womb. And narrowly avoided death after a quarry explosion near his house sent rocks through its roof just seven days after his birth.

It is also claimed that Joshua’s birth was ‘prophesied’ 100 years prior.

TB attended St. Stephen’s Anglican Primary School in Arigidi Akoko, Nigeria, between 1971 and 1977, but failed to complete one year of secondary school education.

During his school days, he was known as a “small pastor” because of his love for the Bible. He organized Bible studies for local children and attended evening school during this period.

Furthermore, TB Joshua attempted to join the Nigerian military but was thwarted due to a train breakdown that left him stranded en route to the military academy.

Emmanuel TV’s YouTube Channel had over 1,800,000 subscribers and 400 million views before it was closed in April 2021 after allegations of hate speech.

Google ranked one of Emmanuel TV’s YouTube videos as the fourth most-viewed clip ever within Nigeria.

However, these are the only tip of the iceberg, you will read and know more about TB Joshua in detail on this Wikipedia page.

Evelyn Joshua is the wife of late TB Joshua and the couple shared three children. The information for his children is not revealed yet but it will be updated soon.

TB Joshua was known for making predictions and for his claims to cure several ailments and to make people prosper through miracles.

According to Forbes, he had an estimated fortune of several million dollars.

Many African presidents, senior government officials, international football players, musicians, and other high-profile guests have worshipped in his church.

In one of his videos, watched more than 1.5 million times, a woman is seen being hit violently to “cure” her of her sexuality.

Homosexuality is illegal in Africa’s most populous country, and “homosexual acts” can carry a 14-year prison sentence.

Joshua was listed by Forbes as the third-richest pastor in Nigeria with an estimated net worth of between $10 – $15 million, in 2011. However, SCOAN denied the claims.