The MTV personality and blogger Kaitlynn Carter announced that she is pregnant with her boyfriend Kristopher Brock. The New Beginnings star Kaitlynn revealed on her Instagram post that she and her boyfriend are expecting their first child together.

This is a piece of great news but shocked her fans and entertainment media, in fact, once she said that she doesn’t want a relationship “that is in the tabloids”.

But following the news about her pregnancy, media attention turned on her partner Kristopher. Moreover, fans and media want to know about her boyfriend. Hence, in this post, gather information about Kristopher Brock such as wiki, age, profession, relationships, net worth, and more. 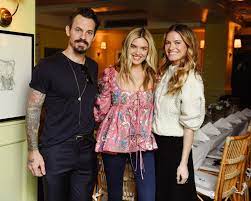 Kristopher is a fashion designer and co-founder of the Brock Collection. He is already a famous fashion designer, especially for women’s collections. Reportedly, brock is in her early 30s.

Besides, Kristopher currently serves as creative director of the brand and he is a father to a six-year-old son called Charlie from his ex.

Brock rose to fame after dating the MTV personality, and blogger, The New Beginnings star Kaitlynn Carter. On her Instagram, she shared a post with an ingenious photo of her and Brock’s shadow with a silhouette having an obvious baby bump. Carter added a black heart emoji to the caption.

✨ 1 ✨ true story.. @kristopher.brock and I were introduced by a mutual friend over text last May. I asked him out on a first date a few days later (unknowingly) ON HIS BIRTHDAY, May 18. he had plans w his son that night, but we got together for dinner on the rooftop of @thesurfridermalibu the following night.. and the rest is history… 🖤,” she captioned a compilation of sweet moments between the duo via Instagram in May 2021.

Laura Vassar is the ex-wife of Kristopher Brock and they founded the Brock Collection. They incipiently met at Parsons School of Design in New York. According to the company’s website, the exes formed a women’s luxury ready-to-wear label together that they continue to collaborate on.

He is already a father. Brock and Vasser welcomed their son, Charlie, in December 2014. Besides, “#CharlieWrightBrock,” he captioned a photo of the newborn via Instagram at the time. He continues to post adorable photos of him and his son on his social media.

Kaitlynn Carter is the girlfriend of Kristopher, dating each other for a year. Carter and Brock offered fans a glimpse at their dynamic when he appeared on her “The Bright Side” podcast.

“I always like to have guests on the show who I think to make sense with the theme of the show: optimism and positivity,” Carter shared as she introduced her boyfriend in a November 2020 episode.

However, The Texas native was previously spotted with Amber Heard twice in October 2018.

The Stars Offline notes that he is reportedly worth over $1 million in 2021.